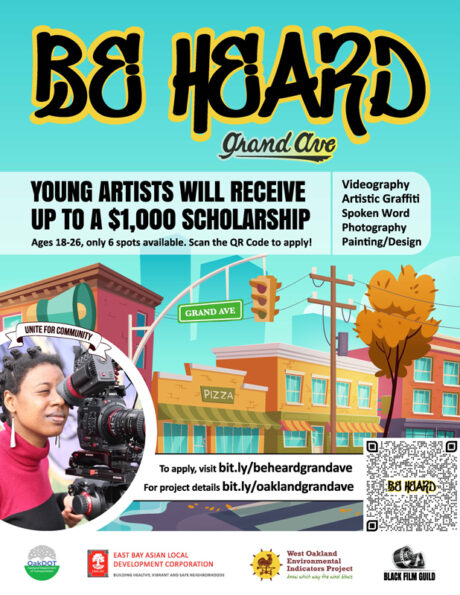 The Black Film Guild partnered with the City of Oakland Department of Transportation (OakDOT) for the first of its kind 2020 – 2021 Grand Avenue educational and outreach initiative.

The City of Oakland Department of Transportation (OakDOT) conducted a corridor study on Grand Avenue between Mandela Parkway and MacArthur Boulevard. The project corridor included a 2.5-mile extension in District 3 of Oakland, California. We sought to incorporate the feedback of local youth from underrepresented communities connected to the project in order to better understand what improvements they would like on the Grand Avenue corridor.

Partnering with OakDOT, the Black Film Guild conducted local outreach of youth artists along the Grand Avenue corridor and provided resources to complete their projects in the form of materials, studio space, and project mentorship (audio, video, graphic design, art, spoken word). The finished projects produced by the local youth were an immense success and generated a sense of community ownership and provided a safe space to express themselves through art.

We observed our core value of education by pairing each artist with a local mentor associated with their discipline ranging from visual design to poetry. This educational component required the young artists to meet with their mentor regularly as they developed their art projects.

Let’s learn more about the youth artists, projects and the positive changes they imparted on Grand Avenue.

The project objectives were to create a series of engaging art that reflected the diversity and culture of the residents within the project corridor.

The projects were led by the Black Film Guild and included but not limited to: videography, editing, graphic design, animation, pre-production, spoken word, and artwork.